It's just not cool. 2v1 is impossible to win. Even if the game is lost, disconnecting keeps your teammate in an unpleasant experience. Don't be like this.

This is a universal tip, for all the game modes. Pay attention to cards and concentrate on your plays, not at spamming emotes. Also, nobody gets derailed in 2v2s, it's just too much fun to be upset.

Hover your cards. A lot.

By hovering your cards long before playing them, you signal your teammate your intentions so you can coordinate better. You can use it creatively, for example:

Not hovering your cards in advance leads to double The Logs and overcommits on defense and offense.

Be aware of your teammate's cards.

You can check the cards your teammate has in his/her hands by clicking the nickname (it is visible by default). Get in the habit of looking there before each push or defense. It is good to know if you can support each other. 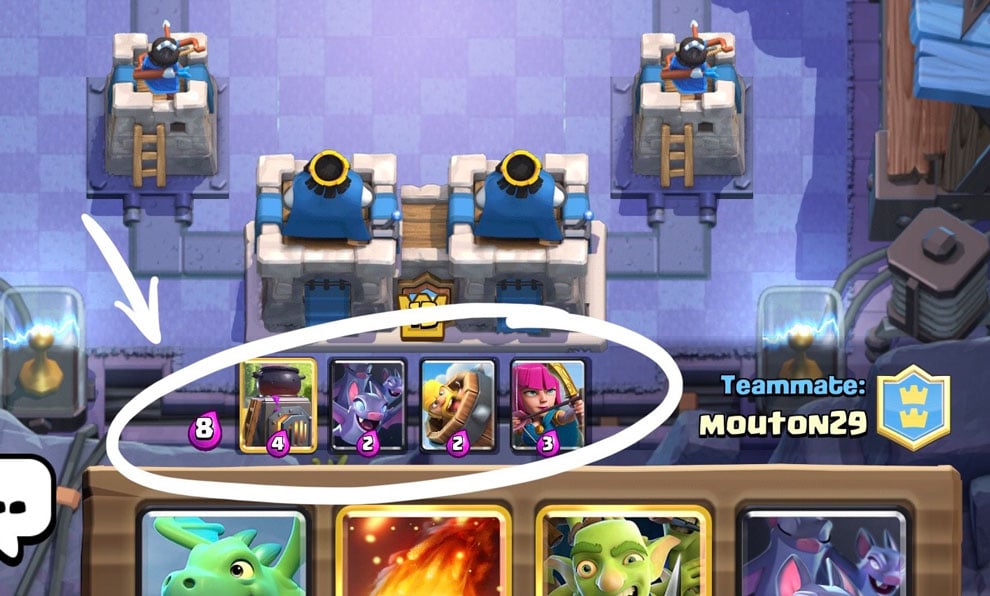 Don't play solo, support each other.

2v2 is a team mode. You don't play alone, one-player push is easily defended by two players. That's why you need to act as a team. Attack in one lane in a big push assisted by spells. Or distract in one lane and then sneak Miner + GobGang in other.

See what cards your teammate has, how much elixir. Then wait for him and attack simultaneously. Patience is the key to success in 2v2s too.

If you happen to have an "inexperienced" teammate that doesn't play at the top of his/her game, don't be tempted to throw the game by supporting him. It is much better to save elixir to defend the counterattack after his half-push is defended.

There's no advantage to playing sooner than at 10 elixir at the start. Maybe it works for you in 1v1, but you're going against two opponents here. Be patient and play more reactively than aggressively trying to spend all your elixir on all-in push by yourself.

Don't overcommit, space out your troops.

There's two of you for any defense. Before you try to do it solo, look at what your teammate has in hand. If both of you defend a push, usually with units placed near each other, you give opponents a lot of spell value.

It is hard, but very important, to play the units as far from each other on defense as possible. This way, one Poison won't take out the whole defense.

Have fun with your 2v2s!

Please support the development and server cost by disabling Ad Block for this site.